The Beauty of the Reverse-Band Back Squat, Part 2: The Rationale

Author’s note: This article is the second post in the series, “The Beauty of the Reverse-Band Back Squat.” You can find the series’ first installment here.

The reverse-band back squat might seem like a back squat with a hyphenated prefix, but it’s more than that. With the bands attached to the top of the squat rack and the barbell, the bands tighten as you descend into the squat, thereby providing you increasing amounts of assistance and thus decreasing the total load that you’re lifting the farther you descend. As you rise from the bottom of the squat, the tension on the bands decreases, thereby providing you decreasing amounts of assistance and thus increasing the the load that you’re lifting as you ascend. In other words, the weight you feel on your back is lightest when you’re at the bottom of the squat and heaviest when you’re standing. For example, I might have 405 pounds on the barbell while doing a reverse band back squat. If the bands have no tension at lockout, then I would be lifting all 405 pounds at lockout. As I descend, the bands increasingly tighten and increasingly assist. Thus, the actual load I’m lifting at the bottom of the squat might be 315 pounds, since the tension in the bands is effectively lifting 90 pounds of the loaded barbell for me. 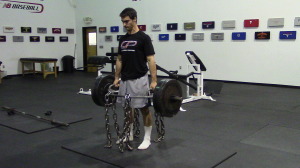 The trap bar deadlift with chains is another example of how using accommodating resistance can improve technique and decrease the risk of injury.

In the case of the back squat, the movement itself might not be problematic or injurious. Instead, what might be problematic is how people load the movement. In a conventionally loaded back squat, the method of loading is such that, as Mike Boyle observed, the strength capacity of the lower back is often the limiting factor instead of the strength capacity of the lower body. The same 405 pounds that might feel easy to lock out feels almost overwhelming to squat out of the hole.  As I discussed in the first post in this series, the lower you squat, the longer the moment arms at the knees and hips become and thus the higher the net joint moments at the knees and hips become (i.e., the more force your knee and hip extensors need to create). Your torso also becomes increasingly horizontal, so your spinal erectors must produce more force to prevent your spine from flexing (i.e., you face-planting). These biomechanics explain why the bottom of the squat is the hardest part of the lift. What Boyle realized is that often a person’s limiting capacity was their ability to extend their back (i.e., not face-plant), rather than their ability to extend their knees and hips. As you rise, the moment arms and subsequent net joint moments decrease, which explains why the same weight feels easier at the lockout than at the bottom of the squat, and hence why people can quarter squat much more weight than can squat to parallel. Expressed another way, a weight that you could perform half-reps might overwhelm you, particularly your back extensors, if you used a full range of motion.

Boyle’s solution to this biomechanical problem was to use unilateral exercises. The downside, as I wrote in part one, is that such exercises have the tradeoff of being inherently more unstable and thus may not be conducive to higher intensities. Using bands or chains might be another solution to the problem, since the weight you’re actually lifting will be lighter in your biomechanically weaker positions and heavier in your stronger positions. The logic is that you can minimize the external load when the spinal erectors are in a position in which they would have to work especially hard (i.e., when the torso is leaning forward) and increase the external load as the contribution of the spinal erectors decreases. As a result, the capacity of your spinal erectors is less of a limiting factor because the net joint moments at the bottom of the squat will be smaller. You also don’t stress your back extensors as much, which is especially valuable for people who already have overactive spinal erectors (i.e., PEC’s in PRI lingo). Because the back extensors don’t work as much, you can therefore engage your anterior core more and maintain a more neutral spinal alignment. Furthermore, whereas the lockout of a conventional back squat might feel easy compared to the reversing out of bottom of the squat, the lockout of a reverse banded back squat should feel about as difficult as reversing out of the hole. Thus, the lower body muscles are being intensely challenged throughout the duration of the range of motion, unlike in a conventional back squat.

← The Beauty of the Reverse-Band Back Squat, and Why I Might Never Back Squat Again: Part One
An Introduction to the Postural Restoration Institute, Part 2: Biochemical & Physiological Responses to Neurological States →