Tone Down For What, Part One: Unconventional Methods for Better Recovery, Health, and Well-Being

Recovery is sort of like the the ball boy for the New England Patriots: nobody really appreciates that he’s critical to the organization’s success, at least until there’s a scandal. Okay, the analogy isn’t perfect, but the point is that adequate recovery is critical to training programs’ success. The more efficiently an athlete can recover from a workout, the sooner they can train again, which eventually allows them to take on a greater training load.  This greater training load, in turn, elicits greater adaptation and the development of higher levels of fitness that may eventually allow an athlete to surpass their competition.

As Peter and I have discussed in previous posts, the physiological processes that drive recovery and repair are predominately regulated by the Autonomic Nervous System (ANS).  More specifically, the parasympathetic branch (PsNS) of the ANS, which is associated with “rest and digest” functions, is the division that helps promote recovery via a multitude of mechanisms following the withdrawal of a stressor. The PsNS works together with the sympathetic branch (SNS) of the ANS, which is primarily responsible for “fight or flight” functions, to maintain homeostasis in the body. Though the two are technically complementary in that both are required to some degree at all times for homeostatic regulation, the downstream physiological pathways that they activate are actually antagonistic: the PsNs primarily stores energy and repairs structures, while the sympathetic branch primarily mobilizes energy to deal with perceived threats. This is admittedly an oversimplified illustration of the highly complex nature of ANS function, but it is adequate for the purpose of this post; if you’re interested in learning more about these systems, then I recommend you read Dr. Robert Sapolsky’s book, “Why Zebras Don’t Get Ulcers: The Acclaimed Guide to Stress, Stress-Related Diseases, and Coping,” which is the de facto book about stress, stress responses and stress management, and their effects on health.

Because the PsNS is primarily responsible for rest and recovery functions, in order to expedite recovery it’s crucial to increase parasympathetic activity and to decrease excessive sympathetic activity following application and subsequent removal of a stressor. In the context of performance, an athlete needs to be able to immediately respond to an intense stressor such as a training session by increasing sympathetic nervous system output, but following withdrawal of the stressor (the end of the training session in this case) the athlete must also be able to “turn down” sympathetic output and allow the PsNS to take over and promote recovery from and adaptation to the demands of the training. Because the ANS is almost exclusively under subconscious control, this process occurs spontaneously and without conscious intent. Research and anecdotal evidence suggest, however, that there may be ways to improve the efficiency of these recovery processes.  Here are a few of these simple, research-based tips intended to help improve your recovery, health, and well-being that you might not be familiar with:

Consciously focusing on slowing your breathing rate and increasing the length and depth of your exhale relative to your inhale can have profound effects on autonomic function and mental well-being. In a 2014 study, Van Diest et al. had participants perform four different breathing patterns to determine the effects of respiration rate and inhalation-to-exhalation ratio on several parameters of overall health and autonomic balance (e.g., heart rate and respiratory sinus arrhythmia) as well as perceived well-being (e.g., self-reported measures of relaxation and positive energy). Participants performed each of the breathing patterns for five minutes, during which physiological data was collected. Following the intervention, the subjects completed two surveys to assess their mental and emotional well-being. The researchers found that when participants breathed slower (six breaths per minute) and exhaled for about twice as long as they inhaled, they had improved respiratory sinus arrhythmia, reported feeling more relaxed and less stressed, and possessed more mindfulness and positive energy. An important limitation of this study is that we can’t determine how long the emotional and physiological changes may last. That being said, we may be able to glean some valuable insight from this research and amend these insights upon further analysis of the relevant research.

One takeaway is that spending a few minutes each day performing slow-paced breathing with long exhales may improve your mood, help your body and mind recover more efficiently, and better prepare you to deal with future challenges. It might be especially beneficial to perform this breathing after stressful events, such as a training session, competition, or dinner with the in-laws, since it’ll help to shift a person from a sympathetic-dominant state to a more parasympathetic-dominant state. Breathing in this manner as part of a pre-bed routine may also help people fall asleep, since it can induce a more relaxed state.

Of course, this recommendation may seem similar to something else Peter and I have discussed ad nauseum: the principles and applications of the Postural Restoration Institute. I don’t want to belabor this point because we have discussed it quite a bit already, but suffice it to say that the breathing components of PRI’s exercises may induce neurophysiological and psychological states that help to improve recovery, health, and well-being. 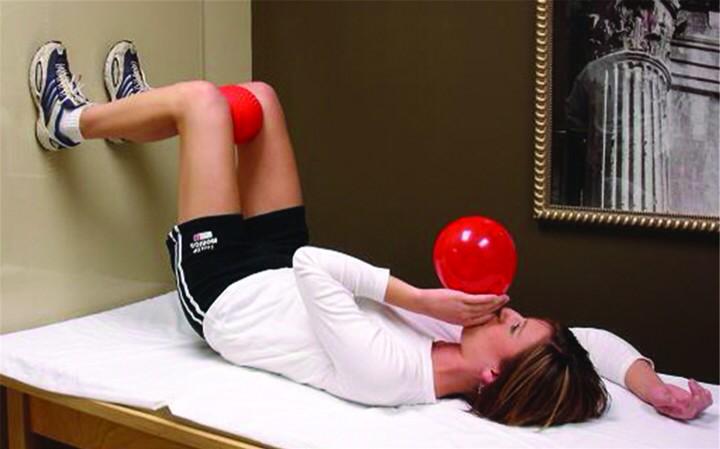 There might be something to that balloon-blowing, PRI voodoo…

2) Breathe Through Your Left Nostril (No, Really…)

Though I’m not an expert on the history of yoga, I do know that the method of alternate or unilateral nostril breathing is quite popular in the practice and has been used in various yogic traditions for oodles of years. Yogic traditions have ascribed different attributes to breathing through the right and left nostrils: breathing through the right nostril supposedly has an “excitatory effect,” while breathing through the left nostril is supposedly “inhibitory.” In recent decades, researchers have investigated these yogic practices and their effects on various measures of health and well-being with some surprisingly vindicating results. I had a minor urge to make a terrible joke about how these findings would blow your mind and your nose, . Whoops. 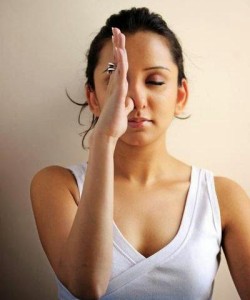 Breathing through your left nostril: it’s as simple as it seems.

In a 2014 study, Pal et al. assigned medical students to either a right nostril breathing, left nostril breathing, or a control group for a six week study to determine what effects, if any, these interventions might have on autonomic and cardiovascular function. For an hour per day every day during the six-week experiment, participants performed their assigned breathing protocol. In the experimental conditions, participants closed the designated nostril and breathed with a five second inhale and a five second exhale. Participants in the control condition didn’t receive any instruction. I’ll quote the study because this sentence amuses me: “However, they [the participants in the control condition] were allowed to sit in the same room and breathe normally for the same amount of time.” Awkwaarrddd.

The researchers collected measurements of cardiovascular function (e.g., resting heart rate, diastolic and systolic blood pressure) as well as autonomic function (e.g., heart rate variability data) before and after the six-week intervention, and the results were profound. The average resting heart rate of subjects in the control group was unchanged, while that of the subjects in the right nostril breathing group increased by ten beats per minute. The average heart rate in the left nostril breathing group, by contrast, actually decreased by about seven beats per minute. Similar trends were observed for systolic and diastolic blood pressure, as well as mean arterial pressure and rate-pressure product. In each case, the control group didn’t exhibit a statistically significant difference between pre- and post-intervention measurements, while the right nostril breathing group significantly worsened and the left nostril breathing group significantly improved. In addition, significant differences also existed between groups. You can view the full table of results here.

The practical implications of this study are tentative because the protocol used was so extreme. Practically speaking, it seems unlikely that athletes or the average person for that matter will devote an hour a day to paced left nostril breathing. It’d also be great if there were more studies of such high quality that compared different lengths of practices to determine if benefits could be achieved in less time. That being said, other studies have shown positive acute effects from only five minutes of left nostril breathing, so even relatively minor exercises might be worthwhile.

As with slow-paced breathing, it might be best to use left nostril breathing after especially stressful events to expedite recovery in addition to before going to sleep. You could also do it at random times, such as when you’re sitting in class or after a meal. I might know someone who does that… (Hint: it’s me.)

What’s more, a person might want to make sure that their left nostril isn’t occluded, since they’d then have to breathe predominantly through their right nostril. Could it be that stuffed noses can hinder recovery from bouts of training and make people crotchety? Perhaps. Which leads to the next tip…

Though my suggestion to do nasal saline rinses may be more theoretical than the previous suggestions, it draws on similar themes (if anyone is aware of studies on the effects of nasal saline rinses, then don’t hesitate to share them with me!). For example, if a person’s left nostril is occluded for some reason then air will predominantly travel through the right nostril, which may have deleterious autonomic and cardiovascular effects. Using a nasal saline rinse could therefore quickly (though perhaps fleetingly) improve airflow and thus improve autonomic and cardiovascular function.

If a person’s nasal passages are significantly occluded, then it seems that there may be two consequences: 1) the person continues to breathe through their nose, but their inhalation will be longer and more labored, or 2) they inhale through their mouth. The occluded airways will decrease the rate at which air travels through the respiratory system, hence forcing you to inhale longer and more vigorously to meet the body’s demand for oxygen. Increasing the length and depth of inhalation without a subsequent increase in the exhale may have the detrimental effects described in the first part of this article. Of course, it’s entirely possible that the length of exhalation would increase as well, so it’s worth noting that the ratio of inhalation to exhalation may not actually change.

Warning: you may feel self-conscious while doing nasal sinus rinses.

Either way, the increased difficulty of inhaling may increase the recruitment of accessory respiratory muscles (e.g., scalenes, sternocleidomastoid, external intercostals, pectoralis minor, etc.) in order to increase the pressure gradient between the environment and the lungs. This muscular activity is reminiscent of the neck breathing I discussed in a previous article and might cause, among other things, neck tightness and worsened movement quality. Long story short, doing a nasal saline rinse to clear your nasal passages might allow you to breathe more diaphragmatically which, as I’ve discussed in the aforementioned article, is a good thing. Anecdotally speaking, physical therapist (and PRI jedi) Zac Cupples mentioned in a blog post that he experienced profound improvements beyond just the unblocking of the nasal passages when he used a nasal saline rinse, though the effects didn’t last long.

That’s all for part one of this series—I hope you enjoyed it! In part two, I’ll discuss more methods for improving recovery, health, and well-being. If you have any questions or comments, then don’t hesitate to share them in the comments section.