SUP PEEPS?!?  It’s been quite a long time since I last posted, and I must say I have dearly missed you all.  I’m not, however, going to bore you with a soliloquy about the details of my life or a hilariously witty introduction as per the usual; let’s just get right into it!

Concussions have been getting a lot of press in recent years, and rightfully so–they are a major health and safety issue in athletics of all levels, yet we unfortunately know relatively little about them. The research into concussion diagnosis, treatment, and pathophysiology is no doubt in its infancy, but even more troubling is the fact that the information that we do currently have available doesn’t seem to be common knowledge.  Therefore, my goal with these next few posts is to give a primer on the basics of concussion: what it is, how to prevent it, and what to do about it if it does occur.

Let’s start with the basics: what exactly is a concussion?  The most recent Concussion in Sport Conference (CSC) defined it as “a complex pathophysiological process affecting the brain, induced by biomechanical forces” [1].  Essentially, either a direct blow to the head or force transmitted up the kinetic chain from a blow to the body causes injury to the brain, either with or without accompanying craniocervical lesion(s).  It should be noted that while concussion and mild traumatic brain injury (mTBI) are often used interchangeably, the CSC recommended that the two terms be distinct, with concussion implying complete recovery and mTBI being associated with persistent symptoms [1].

That’s all well and good, but what exactly happens to your brain when a biomechanical force “injures it”?  For starters, you need to know that the brain is made up primarily of neurons and neuroglia.  The neurons constitute the major known signaling elements, though the importance of glia is becoming more and more apparent as more research is done.  Like all cells in our body, neurons are surrounded by a cell membrane, which normally keeps specific compounds and ions either inside or outside the cell at precise concentrations.  When a force “shakes” the brain, the rapid movement is thought to stretch the neuronal membrane, and previously well-regulated ion channels become “leaky” and allow some compounds and ions to leak out of the cell [2,3,4].  One such ion, potassium, is typically in high concentrations inside of the cell and low concentrations outside of the cell, creating an electrochemical gradient.  Efflux of intracellular potassium through the leaky cell membrane causes cellular depolarization, which leads to indiscriminate release of excitatory amino acids (EAAs) such as glutamate [5,6,7,8].  In addition, glutamate itself extravasates from damaged neurons, and its reuptake by neuroglia such as astrocytes is impaired [5,6,9,10]. 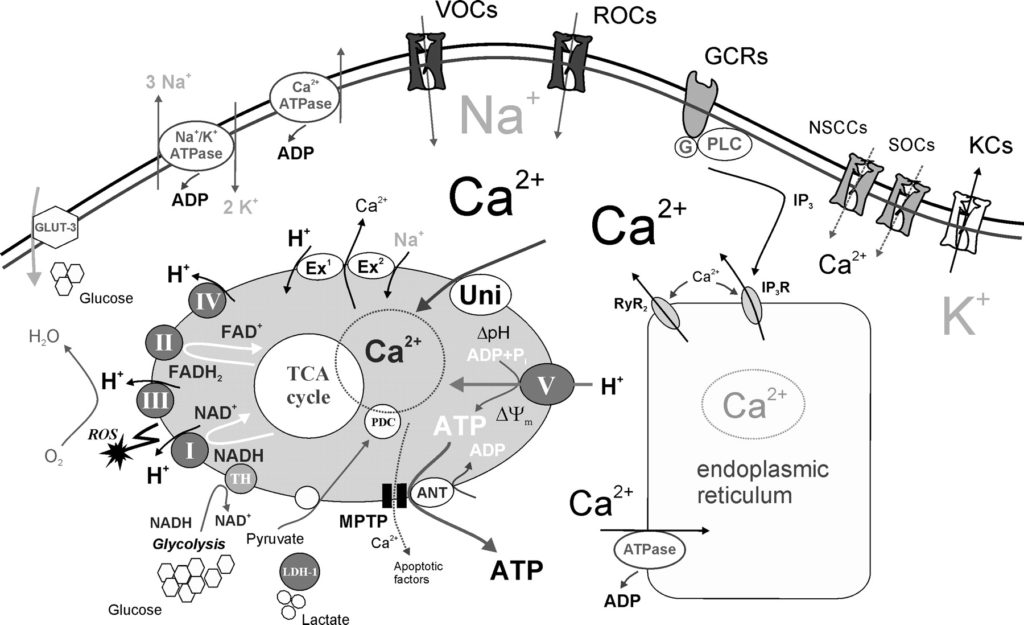 A diagram outlining the complex nature of the biochemistry of neuronal metabolism and molecular signaling. Image from http://ajpcell.physiology.org/content/292/2/C641.

The net effect is a transient spike in the extracellular concentration of EAAs like glutamate, which serve to 1) bind ligand-gated potassium channels and further promote potassium ion efflux, creating a positive feedback loop, and 2) bind the NMDA receptor, which opens calcium ion channels [5,6,7,11].  Because calcium ions are typically in higher concentrations outside of the cell than inside of the cell, when these channels open calcium ions flow into the cell.  Influx of calcium ions causes 1) release of intracellular calcium stores, creating yet another positive feedback loop, and 2) increased permeability of the mitochondrial membrane [5,6,12,13,14,15].  This latter effect causes an uncoupling of oxidative phosphorylation–i.e. aerobic metabolism is impaired–as well as a release of reactive oxygen species (ROS) into the cell’s cytoplasm [6,16].  The ROS eventually overwhelm the cell’s ability to scavenge them, depleting the intracellular antioxidant pool.  Some of these ROS cause chemical modification of biomolecules involved in energy production (the coenzyme/electron shuttle nicotinamide adenine dinucleotide/NAD being one of them), further impairing the cell’s ability to synthesize ATP [6,17].

Simultaneously, the cell must work overtime to restore the balance of ions across its cell membrane.  Cellular pumps that shuttle potassium back into the cell are activated and work at maximal capacity to replenish the intracellular potassium concentration [5,6,18,19].  Unfortunately, these pumps require ATP to function, and are thus energetically costly.  This creates a paradoxical dynamic where neurons have an extremely high energy demand (to restore cell membrane homeostasis), but are not well-equipped to meet that demand (because mitochondrial metabolism has been disrupted).  Neurons rely heavily on glycolysis to produce ATP, resulting in 1) a buildup of the metabolic byproduct lactic acid, and 2) an eventual general depression of neuronal activity to conserve energy, since glycolysis is relatively inefficient in terms of ATP production and burns through glucose stores rapidly [5,6,20,21,22].  The former effect can lead to acidosis and disruption of the blood-brain barrier, which can lead to cerebral edema/swelling in severe cases [5,23].  The latter effect leads to the somatic, cognitive, mood, and sleep disturbances that are hallmarks of concussion [5,24]. 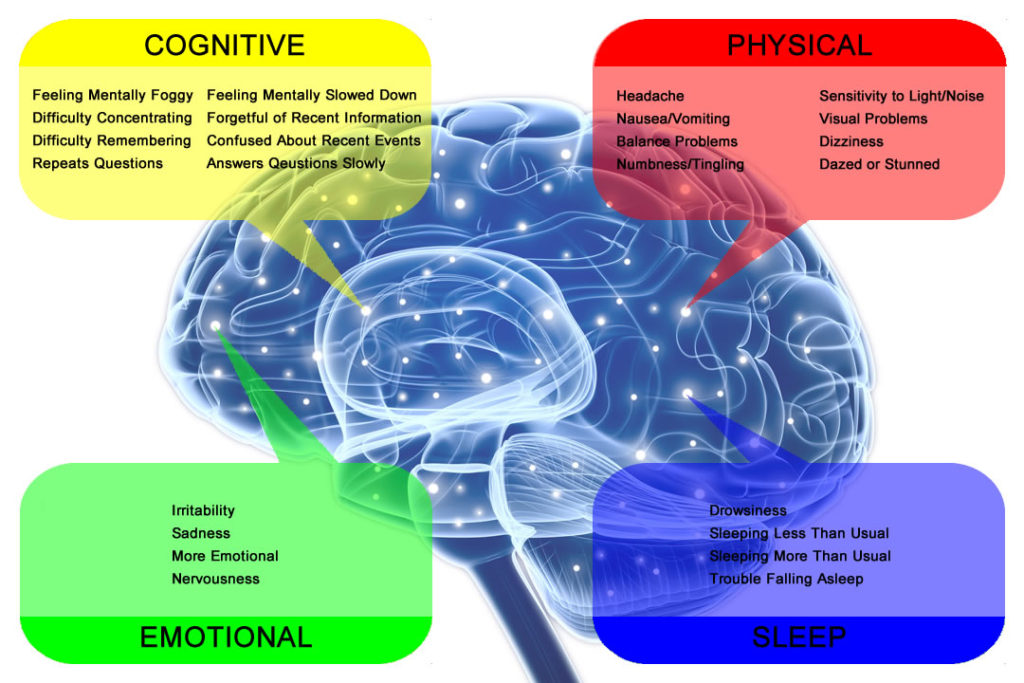 The multiple and varied symptoms of concussion may be tied to a temporary mismatch in neuronal energy production and consumption. Image via http://www.advancedvisiontherapycenter.com.

Concussion Prevention: Is There Anything We Can Do?

Many think concussions are an unavoidable part of athletics, and to an extent they might be right.  There are, however, things that can be done to decrease an individual’s susceptibility.  First and foremost would be general whole-body strengthening; because concussions can be caused by blows to the body that are transferred up the kinetic chain to the head/neck, improving the ability of the body to absorb these forces would certainly decrease the likelihood that the force reaching the head/neck would be above the threshold required to induce a concussion.  In particular, improving isometric and eccentric strength should translate well to increasing the muscles’ ability to resist rapid stretch and the body’s overall ability to resist/absorb force.

In addition, and often overlooked, neck strengthening specifically is a key in reducing concussion susceptibility–increasing the neck musculature’s ability to absorb force consequently decreases the force that gets transmitted to/experienced by the head/brain.  A 2014 study by Collins et al. of almost 7,000 high school athletes across 25 states found that smaller mean neck circumference, smaller mean neck to head circumference ratio, and weaker mean overall neck strength were significantly associated with concussion.  Furthermore, the researchers found that for every 1 pound increase in neck strength, concussion risk decreased by about 5% [25].  Clearly, if you’re serious about concussion prevention, you need to be doing neck strengthening.

Similar to the recommendations for whole-body strengthening, training the neck eccentrically and isometrically is probably your best bet.  The best way to do this is partner manual-resisted complexes where one person uses their hand to apply force to the head of their partner, and the partner must resist.  This can be done in a proactive fashion (the person knows when the force is going to be applied via a countdown) or a reactive fashion (the person does not know when the force is going to be applied and must react), though the latter must be done with caution so that the person applying the force doesn’t push too hard too fast and injure the person they are working with. 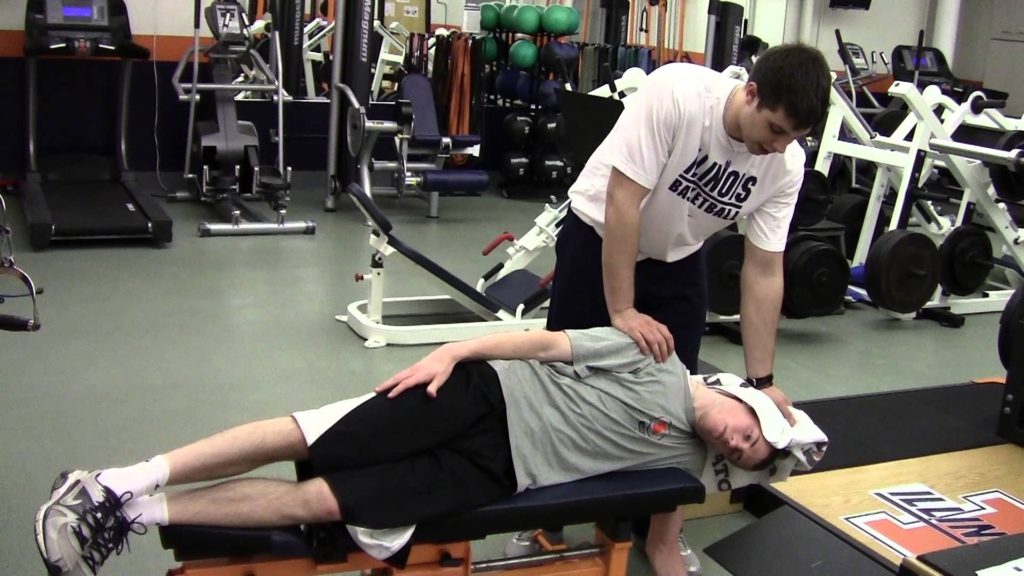 An example of a sidelying variation of partner manual resistance neck strengthening exercises. Image from https://www.youtube.com/watch?v=JR4mG7UUR2I.

Concussion Treatment: How Do We Recover?

As previously mentioned, even with all of the preventative measures in the world, some concussions are just unavoidable.  So what do we do once a concussion has been diagnosed?  How do we get the athlete back to 100% as quickly and safely as possible?

Recall from the outline on the pathophysiology of concussion that following the concussive event, the subsequent biochemical cascade causes an impairment of neuronal aerobic metabolism, an increased reliance on glycolysis for energy production, and an acute overall decrease in cerebral bloodflow.  It has been proposed that light aerobic activity–below the intensity threshold at which symptoms would recur–rather than prolonged rest (which can lead to deconditioning, fatigue, and depression) would speed recovery by promoting increased cerebral blood flow.  A few preliminary studies in subjects with post-concussion syndrome found that light aerobic exercise was safe and led to improvements in symptoms when compared with a no-treatment baseline [26,27].  In addition, data from animal models suggests that aerobic exercise performed 14 to 21 days after concussion improves cognitive performance and upregulates  the concentration of neurotrophins  such as brain-derived neurotrophic factor (BDNF) that promote neuronal recovery [28,29,30,31].  More research is clearly needed in this area, but it seems that light aerobic exercise at an intensity that is tolerable (i.e. does not elicit symptoms) may benefit concussion recovery.  It is of course important that all exercise be approved and supervised by a qualified professional, and that activity be discontinued immediately if symptoms recur.

Lastly, research in animal models suggests that exercise-induced elevations in body (and, by extension, brain) temperature can worsen neurological outcome and increase susceptibility to subsequent re-injury, presumably by amplifying pathophysiological mechanisms such as blood-brain-barrier breakdown, mitochondrial dysfunction, glutamate excitotoxicity, energy imbalance, and injury-induced oxidative stress [2,8,20,32,33,34,35,36,37,38].  Further, epidemiological study of head trauma patients has shown that early post-trauma hyperthermia correlates with unfavorable outcomes [38,39].  It has therefore been proposed that regional cooling of the head/neck to induce a state of mild brain hypothermia may prove to be protective in the acute stages of concussion [38].  In addition, cooling of the face has been shown to increase cerebral blood flow, presumably via a pathway involving activation of temperature-sensitive afferent nerves that in turn modulate prolactin release via serotonergic and/or dopaminergic pathways [38,40,41,42,43].  There are ongoing studies, but currently no data has been published (to my knowledge) demonstrating the efficacy of these strategies in humans. 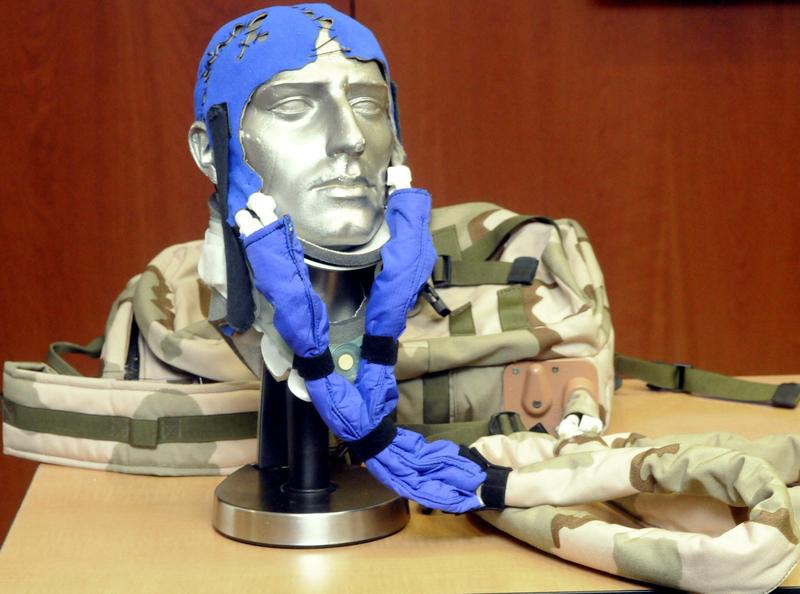 An experimental brain cooling device that may just be the future of head trauma treatment. Image from http://static.news-gazette.com.

While concussions may not always be avoidable, it’s clear that there are things we can do to decrease an athlete’s susceptibility, as well as facilitate recovery in the event that one is sustained.  Stay tuned for part two, where I’ll cover nutritional strategies, pharmacological agents, and supplements that may aide in concussion prevention and/or recovery.

2 comments for “The Concussion Compendium, Part 1: Pathophysiology, Prevention, and Recovery”