My Love Affair with My Treadmill Desk (And Why You Might Want One, Too)

In the past few years, I’ve seen a lot of people proclaim something to the effect of “sitting is the new smoking” or “sitting is killing you”. I’m aware that in attempting to at least partially endorse this view I might come off as just another person who’s repeating the same sensational phrases, but I’ll do my best to make my position perfectly clear. I believe that, in general, standing is better than sitting, for reasons that I will discuss below. However, I don’t want to make it seem as if standing is always better than sitting, or that sitting is always bad for you. Just as there might be health issues associated with too much sitting, there might be health issues associated with too much standing. I can certainly attest to the latter, since I’ve used standing desks for the last five years: while I generally preferred to use a standing desk over sitting to do work, sometimes I’d experience discomfort in my low back, neck and lower extremities when I stood for long periods of time. There’s also evidence out there that shows an increased incidence of varicose veins when standing for prolonged periods of time. In other words, using a standing desk might not be a panacea to all your health maladies. That being said, there are some benefits of using a standing desk instead of sitting at a desk: 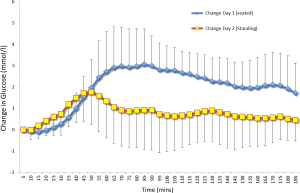 So, there’s evidence suggesting that there are legitimate reasons why standing might be better for you than sitting. But, as this post’s title suggests, I’ve become an even bigger fan of the treadmill desk since I started using it at the beginning of this summer. As you might be able to guess, a treadmill desk is a desk with a treadmill, which allows you to walk as you use your computer. And, as I’ve had to tell almost everyone who learns that I work on my computer while I walk on a treadmill, it’s not that hard to do. I don’t make typos, fall over and injure myself, or experience any other inconveniences. In fact, I usually feel more focused and energized when I work on my treadmill than when I work at a normal desk. I’ve found it easier for me to get into a “flow” when I work on the treadmill, so that when an hour goes by I feel better than when I started. And while I must confess that it doesn’t necessarily make schoolwork fun, it might make it less unpleasant. On some days, I’ve used the treadmill desk for five or more hours, though that’s something I’ve had to work up to doing.

Aside from my positive anecdotal experiences, there’s compelling evidence about the health benefits of walking: If you’re interested in actually having your own treadmill desk, then I highly recommend visiting Treadmill Desk Diary. That’s where I learned how to build my own treadmill desk that met my needs, which were that it be 1) inexpensive, 2) not take up much space and 3) not a pain to put together. The instructions on the website are easy to follow and the author’s narrative of his own experience–he lost 11 pounds without changing anything other than walking or standing while working–is an interesting read. So far, I’ve had a very positive experience with my treadmill desk and recommend it to anyone that’s considering having their own. If you have any questions about it, then let us know.

Including the desk, this setup costs about $250 (goofy guy not included).

← Are High Reps or Low Reps Better for Hypertrophy? Recent Research Says Neither, Sort of.
Monday Musings: Food Labels, Misleading Dietary Advice, and the Methodology Behind My Selection of Supplements →

3 comments for “My Love Affair with My Treadmill Desk (And Why You Might Want One, Too)”